Free Things to do

Free Things to do in Derry

The Derry City Walls, the Guildhall, Peace Bridge and Bogside. What do they all have in common? Not only are they all historical and hugely popular attractions in the wonderful city of Derry, they are also completely free to all visitors. Take a look below to find out more about the top free things to do in Derry. 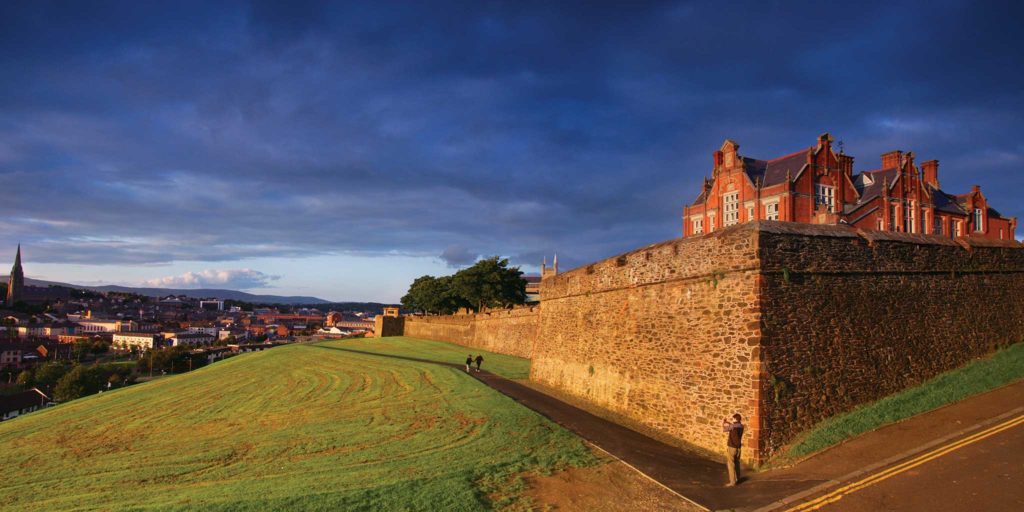 Derry is the only remaining walled city in Ireland, and one of the finest examples of walled cities across Europe. The walls are literally a stone’s throw away from Maldron Hotel Derry and were built between 1613-1618, to defend the city against early 17th century settlers.

The Walls are roughly 1.5km in circumference and contain restored cannons, watchtowers, gates and battlements. The walls form a walkway around the inner city and provide a unique promenade to view the layout of the original town which still preserves its Renaissance Style street plan to this day. 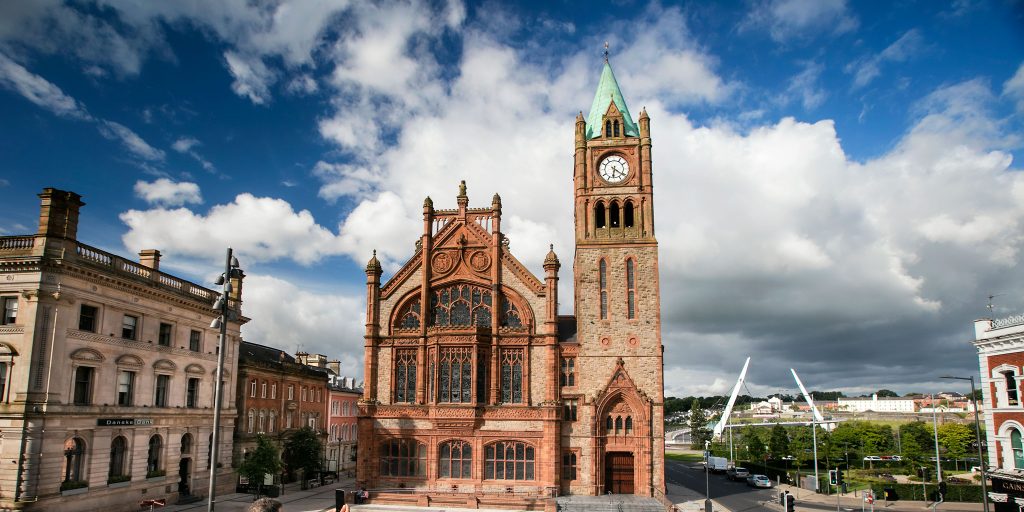 The Guildhall is undoubtedly the most recognisable building in Derry and arguably one of the city’s most stunning landmarks. The Guildhall has stood at the heart of the city since 1887, a 3-minute walk from Maldron Hotel Derry.

It truly is a must-see for all visitors to Derry. The Guildhall has stunning and distinctive features including bespoke stained-glass windows, a unique staircase and a beautiful main hall organ leaving visitors intrigued by this fascinating building.

The Bogside is a neighbourhood just outside of the city walls and is home to the popular tourist attractions, the Free Derry Corner and Bogside Artists. This area was a focal point for many of the events of the Troubles, with the Battle of the Bogside and Bloody Sunday taking place here.

The Free Derry Corner was first painted in January 1969, with the now-famous “You are now entering Free Derry” statement. On the corner, there is a memorial to the 1981 hunger strikers and several murals. There is also a memorial to those who died engaging in paramilitary activity as part of the Provisional IRA’s Derry Brigade.

St Columb’s Cathedral is one of the oldest and most historic buildings in Derry dating back to 1633. It was the first Cathedral built after the Reformation and contains displays of artefacts from the Siege. The cathedral dominates the Derry skyline, standing at an impressive 221 feet.

The current tower and main building are of the original building, with the spire being added in 1821, the Chancel in 1887 and the Chapter House in 1910. The cathedral has many fine stained-glass windows and was built of stone from local quarries. 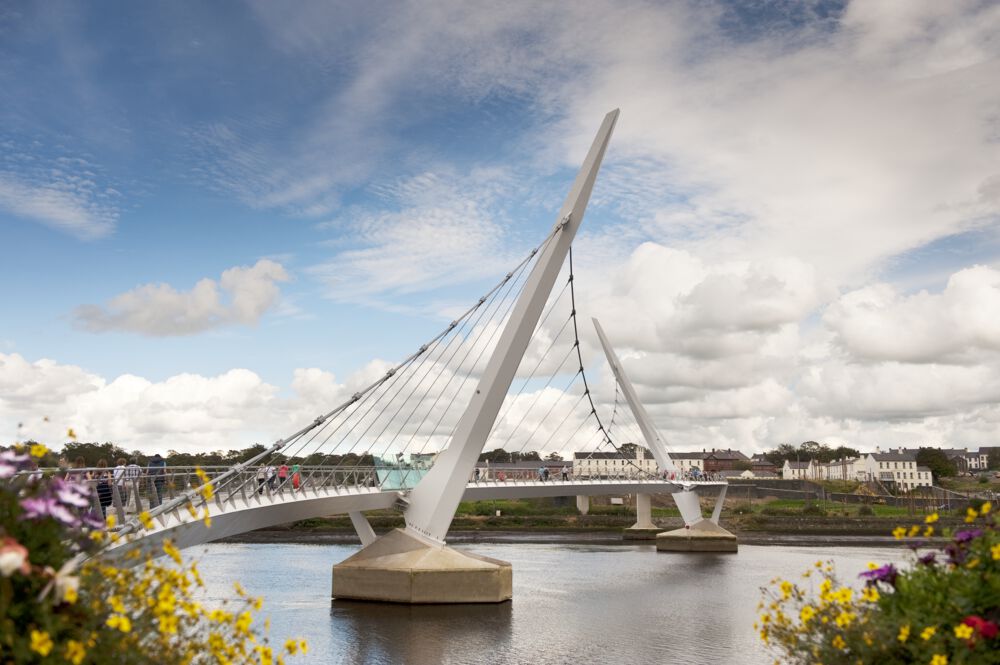 Just a short 8-minute walk away from Maldron Hotel Derry lies the stunning Peace Bridge. The bridge was built in 2011, spanning across the River Foyle, connecting Ebrington Square with the rest of the city centre.

The now iconic bridge is valued highly by locals and visitors alike for its stunning physical beauty and in equal measures for the symbolic story it represents. The bridge is a symbol of peace, intended to end a 400-year-old physical and political gap by bringing the largely unionist east side of Derry closer to the largely nationalist west.

St Columb’s Park is a beautiful, 70-acre woods and park situated on the banks of the River Foyle, an 8-minute drive from Maldron Hotel Derry. The park is a great place to escape the hustle and bustle of the city streets. We highly recommend treating yourself to a coffee from the onsite café as you take a leisurely stroll around the sprawling green lawns of the park.

At the heart of the park lies the beautiful 18th century manor house, St Columb’s Park House. Located at the entrance to the park is Foyle Arena, a state of the art facility which includes a 25m swimming pool, climbing wall and fitness suites. Also, Far and Wild a leading outdoor adventure company are located within the grounds of St Columb’s Park House.

A little further southeast of Derry lies Ness Country Park, home to the largest waterfall in Northern Ireland. The Country Park, a 20-minute drive from Maldron Hotel Derry, is 55 hectares of mixed woodland along with open parkland which extends along both sides of the Burntollet River.

The park is extremely popular with walkers all year round, with over 7km of stunning woodland and riverside walks including a magnificent waterfall walk. Check out the wildflower meadow and wildlife ponds or pop into the new visitor centre with local information and an exhibition on woodland biodiversity. There are also picnic tables available so you can snack while taking in the beautiful scenery. 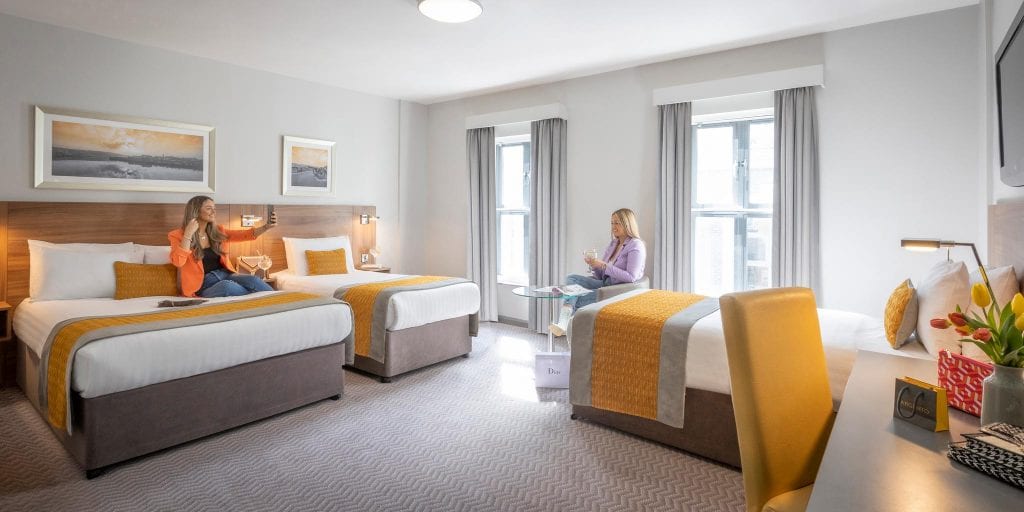 Look no further than Maldron Hotel Derry for your next stay in Derry. We are ideally located inside the historic Derry City Walls, with easy access to many of the popular tourist attractions and transport hubs.

Enjoy a meal in our stylish Grain and Grill Restaurant or wind down with a drink in our Lyric Bar, “the home of loud food and tasty music”. Call it a night in our comfortable and spacious rooms overlooking the Derry City Walls and Bogside.

Enter your details below to hear about our exclusive offers and sales.